Baitcasters, aka conventional reels, own the reputation of having the most difficult learning curve. Spinning reels take some practice getting the cast down, but are much easier than baitcasters. Last but not least comes spincast and undercast reels. When learning how to use a spincast reel, it only takes a couple tries before you’re casting out line. They’re the easiest to learn, but knowing how to use a spincast reel properly can save you some headaches later on.

Knowing How To Use A Spincast Reel Both Inside & Out

The Basics Of Using And Casting A Spincast Reel

On the base of every spincast frame lies a button. This button is in perfect position for an angler’s thumb while holding the fishing rod, and it controls the release of line from the spincast reel. Pressing and holding the button effectively prepares an angler for the cast.

The fisherman continues holding the button through the forward momentum of the cast until it’s time to let the line fly. To do this, he simply releases the button. Once the cast is over and line settles on the water, re-engage the spool by turning the reel handle.

Spincast vs Undercast – What’s The Difference?

If you were to take apart a basic spincast reel and do the same to a basic underspin reel, you’d find their builds to be exactly the same. The differences come on the outside; where they sit on the rod and their button design. Take a look at the differences of each style.

Spincast Reel – Like a baitcast reel it sits on top of the rod. Line comes out a small hole on top of a cone which covers the spool. A spincast reel uses a thumb activated button as a line release mechanism.

Underspin Reel – Like a spinning reel it sits below the fishing rod. Line comes out exactly the same as the spincast reel, but instead of a button it has a trigger.

Note that the trigger of an underspin rod does nothing to change the lesson on how to use a spincast reel. Triggers work exactly like the button. You just pull them up and hold with your index finger instead of pushing down with your thumb. Release the trigger to free the line near the end of your casting motion. Turn the handle to put the reel back in gear, same as before.

The pickup pin spins on a gear when the handle turns. It spins around the spool, guiding line back on as it turns. It’s also the place where problems most often occur on a spincast reel. If line gets pinched by the pin or wraps around it, the handle won’t turn. Another issue is misplacement. If line doesn’t sit right or slips off the pin, it can wrap around gears and become a big hassle.

You can usually unscrew the cone and inspect the spool and pickup pin. Sometimes line that wraps around the gearing can be undone. Other times you’ll want to cut the line and start over. Investing in a higher quality spincast reel with rolling tungsten pickup pins can make a big difference in performance.

Final Tips – After You Know How To Use A Spincast Reel 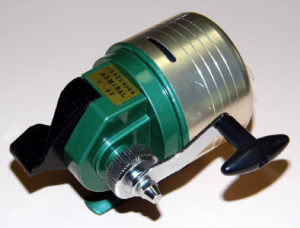 If you already know how to use a spincast reel or you’re done practicing and ready to fish, here’s a few final tips to help reel more in.

Maximum Maintenance – Inspect and grease your spincast or underspin reel from time to time. If the pickup pin is worn it needs replacing or it will damage your line. Gears need grease to keep from wearing or rusting out as well. Always take off the cone and rinse with freshwater after any saltwater use.

Adjust Your Drag Dial – Cheaper spincast reels may not have a drag dial. Premium models allow you to set the drag and some even offer fine tuning. Don’t make that drag too tight. Have fun by letting a fish pull some line out before it tires and comes in.

Try Different Styles – Check out both spincast and underspin models. You may find the way the underspin reel sits below the fishing rod feels more comfortable. Inspect some higher quality reels as well, like the Daiwa Goldcast spincast reel. They come with a real boost in performance.