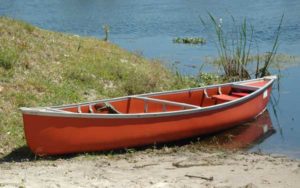 With summer upon us, one of best activities we can do to really feel a part of that summer lifestyle is by spending time on the water. Whether it’s on a motorized boat or just swimming in the water, no summer is complete without doing some form of water activity. For many, myself included, that activity is canoeing.

For others, however, they prefer to kayak down rivers and streams. For someone unsure about which is right for them, the differences and similarities may seem confusing. Which is the best option?

This article will touch on the differences between the kayak and the canoe. Through those differences, we can then determine which is the best vessel for us and our needs.

When it comes to the water, by large, one of the most popular activities performed on the water is fishing. It’s a past time that families can all share together, but it also provides an activity that we can perform alone. Fishing can be an excellent place for solitude and reflection.

If we want to utilize either a kayak or a canoe for our fishing, then we’ll want to understand how its shape and stability can affect our fishing. Kayaks are slimmer than canoes, and as such, they have less of a top to store items. If we tend to carry a lot of equipment with us when we go fishing, a kayak may not be the best choice for us.

Since there are two different types of kayak–the sit-in and the sit-on–both can affect the way we fish as well. For a sit-in kayak, our movements are heavily restricted. While we’re not necessarily trapped in the kayak, we can’t easily turn if the fish drives our line behind us.

As such, if we want to fish with a kayak, then the best type to use would be the sit-on kayak. This allows us better movement, so we won’t lose that catch. However, there is still that issue of space.

This is where the canoe wins out. Canoes are designed to be larger and wider than the kayak. As such, they allow for more storage. In addition, because their top isn’t covered like the kayak, we can easily reach for the equipment that we need or place the fish we have caught in a secure location.

The canoe also wins for fishing when it comes to stability. Because it is wider, the canoe is more stable. So, if you’re using a kayak and a sudden wave or pull from the fish causes us to become unbalanced, we may be more likely to fall into the water than we would be if were sitting in a canoe.

If we want to travel with someone across the water, then we may want to consider which vessel is best to be used for extra company. Again, size and function play a part. The tandem kayak is built specifically for more than a single person to use.

However, because of the kayak’s overall design, that means there is less room for both passengers. As such, we may feel a little cramped when we squeeze ourselves inside of the kayak. This is even more pronounced if we’re also bringing along gear that we have to squeeze in with us.

That being said, the kayak is built to glide along the water a lot more efficiently than the canoe. Because the paddle is dual-bladed, both parties can use little effort to push through the water. As such, this makes the kayak a lot easier to pilot on the water.

The canoe, on the other hand, gives us a lot more space. The two or three, or however many passengers, we take on the canoe have a decent amount of room to stretch their legs. That’s largely in part of the use of benches. It allows our legs to bend instead of having to stretch out in front of us.

Because the paddle of a canoe only has a blade on one side, it can be a bit more difficult to pilot with numerous people. The paddle has to be lifted and pushed through the water at the same time, otherwise, we end up moving in a circle or not moving at all.

As such, when we want to consider whether a kayak or canoe is more appropriate for more than one person to use, we need to consider our needs. Is speed more important or is having storage space? That answer should help us determine what vessel we need.

This has briefly been touched on before, but we’ll revisit the topic here. Stability plays an especially important role when we think about children. If we want to bring young family members on the vessel with us, we have to think about their safety.

In this regard, the canoe is much safer. Because of its wider build, the canoe is far more stable than the kayak. It also has an open top, so if the canoe does capsize, the children can easily get out of it.

This is different from the kayak, especially one that has a closed-in top. For those who are not skilled kayak pilots, it’s easy to panic if you capsize and find yourself trapped in the kayak. For children, this could potentially be lethal.

While you could just opt for a sit-on kayak and avoid the closed-in pilot seat, the kayak itself is still far less stable than the canoe. It’s made for quick and easy maneuvering. As such, kayaks are best left for adults or older children who can be taught how to properly exit their kayaks in the event that they capsize.

Water sports are a lot of fun, and it may be surprising to know that there are actually quite a few sports devoted to both the kayak and canoe. However, if we’re looking into getting into racing, in particular, then we should only consider the element of speed.

Because of its sleek build and lighter weight, the kayak is faster than the canoe. While canoes are sometimes used in races specifically crafted for the use of canoes, if we want speed, then we want a kayak. Besides the build of the kayak, it’s the paddle that makes all the difference.

With its dual-blade, we can easily transition from one side to the other as we paddle. Unlike in a canoe, where we have to take the time and effort to actually move the paddle across our bodies, the kayak is a simple dip and push. We can charge forward with a kayak with relatively little effort.

For whitewater running or racing, the kayak is popularly used. Because of its easy maneuverability, it is better suited to race through these rapids. So, if we’re interested in going fast either through rapids or performing well in races, then we need to find top-of-the-line racing kayaks on the market.

That being said, there are canoes out there that have been crafted for racing as well. While they’re not as fast as a kayak, it is possible to find some that are faster than the average canoe, at the very least. Again, it all depends on what we actually want to use the canoe for and in what activity.

When we’re considering the simple canoe or kayak that was crafted for one person, the differences are minimal. They’re both a little shorter. Depending on our needs for the vessel, however, the kayak is the better solo option.

This is due, in large part, to its easy maneuverability. Piloting a canoe can become tiresome after a period of time when performed alone. It requires more strength and endurance than a kayak.

As such, if we want to take a vessel out on a lake or river for a leisurely activity, then a kayak is best suited for our needs. We can easily paddle along the water in relative comfort. Since its just us in the kayak, there will be enough space that we won’t feel cramped.

However, if we’re using the vessel to go camping in addition to our leisurely floating along the water, then we may want to consider the canoe. Again, this comes down to its ability to store more than the kayak. Alone, we have even more room to place our tent and camping equipment in the belly of the canoe.

In summary, the canoe is the better choice for stability and storage. It’s an excellent starting point for young families who eventually may want to try out a kayak. It’s also a better fishing vessel.

The kayak wins out for speed and ease of use. Less stamina is used up when piloting the sleeker design. For whitewater runs, there’s nothing else.