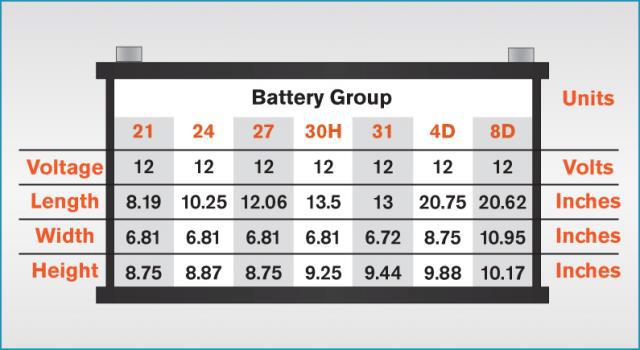 To get our vehicles started, we need a battery to provide the initial spark. Batteries also power the vehicle’s electronics while the vehicle is not running. Marine batteries are water-resistant automotive batteries that are approved to be used in aquatic vehicles, like boats, and jet skis.
Definition
Marine batteries are sold by many different measurements. One of those measurements is the physical case size. Size of the external case the battery is sold in is represented by the group number.

Indication
If looking to find the group number measurement of a marine battery, it can be found on the top of the battery, printed on a specifications label that will have other measurements on it as well. Do not be confused by the gibberish of characters written on the label because the group number will clearly be written with BCI or group next to it. BCI stands for Battery Council International that is a company which regulates the distribution of lead-acid batteries, so it determines group number categories. The factory recommended group number of a vehicle is also in the vehicle’s parts specifications booklet, so if you have the original paperwork, it might be handy to know the initial battery group number your vehicle contained. Otherwise, ask an expert who is knowledgeable about vehicle batteries to identify it.

Purchasing
It typically will be okay to move up, or down the group number scale a few numbers in either direction because the general size of the battery will stay the same across small sections of the scale. However, the shape of the batteries will change, so ensure there is enough room in any direction to hold the marine battery you are trying to install, otherwise, your hood may not close, or the battery may not fit at all, so your money could be wasted. Also, the battery could interfere with other parts, so be careful when improvising on the group number of a battery.